The SALA  Festival exhibition referred to in the previous posts of the blog (here, here, here and here)  has a title. It is  called Collaboration: Interrogating Melbourne's changing urban landscape and it can be seen  at Atkins Photo Lab. The exhibition's opening night was August 3rd,  and the exhibition runs from  August 4th to September 7th  during  the state wide 2018 SALA festival. 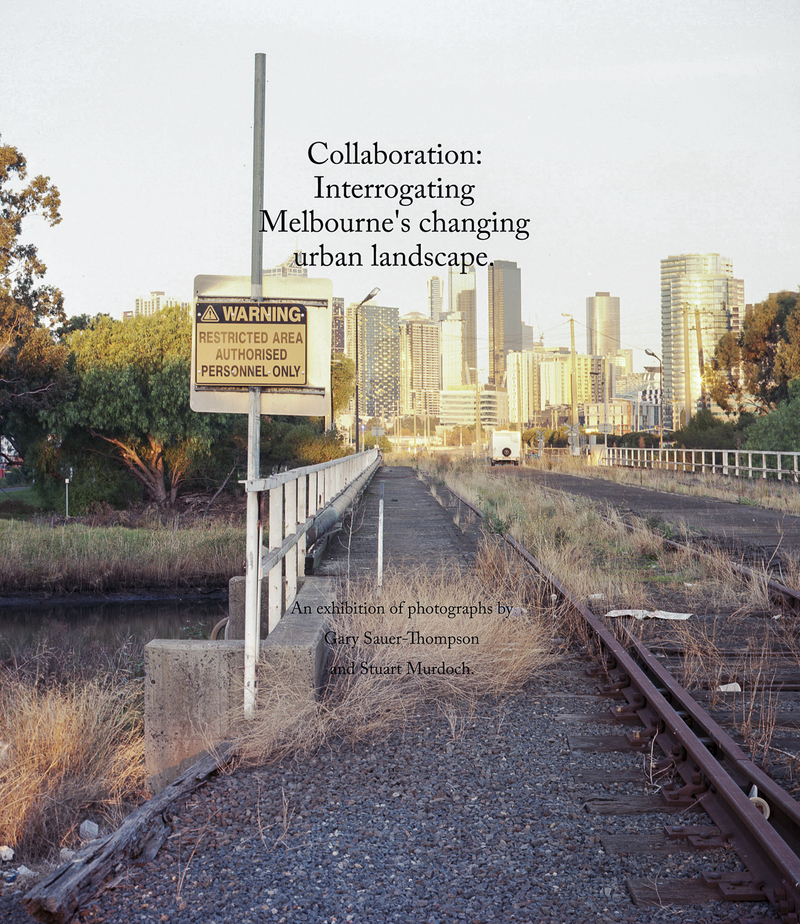 This  exhibition is the first step in a project based on  large format photography (both black and white and colour)  interpreting  the changing urbanscape in Melbourne's  CBD, its industrial suburbs such as North Melbourne, Footscray and Sunshine,  and  the ever expanding western suburban edges  from a topographical perspective.

Paul Atkins opened the exhibition and he talked about the transformative changes in the cities that we live in.  Then Stuart gave an artist talk about how he approaches his photography.  Stuart  highlighted how the has been working on this part of industrial Melbourne  for over a decade as a film photographer,   and he has an extensive archive of 5x4 black and white negatives.  This archive is a form of remembering  of what once was.

For those who cannot make it to see the exhibition,  the blurb for the  exhibition  says that the photographs in the exhibition are a negative presentation of the changing landscape in the CBD and the edges of Melbourne. The former highlight the old industrial city, whilst the latter interrogate the gothic beauty of Melbourne's damaged urban spaces.

Together the photos of these ugly objects and spaces point towards an industrial sublime; one that involves a negative experience, or an oscillation between pleasure and pain, attraction and repulsion.

The photos of the historical objects in ugly urban spaces effect a kind of painful cleavage in our understanding of the past, present and future. The photos of a damaged nature and a repressed culture in an Australian modernity effect a shuddering, tremor or shock that creates an emotional and cognitive dissonance in us.

The sublime in these photographs endeavour to arrest the flow of history, and to open up time for alternative interpretations; ones that verge on the limits of our interpretative frameworks about the violence of the technology of industrial capitalism, its inflicted wounds on nature and the trauma to the human subject. The link between the sublime and trauma calls the conventional notions of a progressive future into question and invites critical reflection. 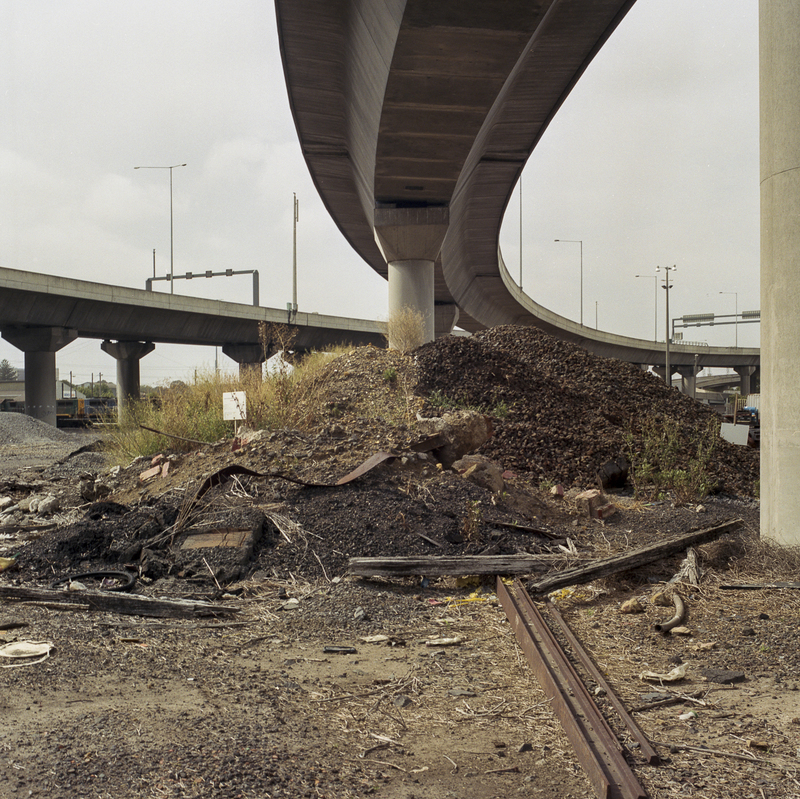 The key aesthetic concept in the blurb  is the sublime.  Here it means a 'going beyond' the current representations of the  babbling of images in a world of commodities to those representations that  engender a  feeling of pain from a loss, fear  or  an absence of something.

The implication here is that a photographic representation of  Melbourne faces a  threat of the absorption of art into the commodity and the entertainment system,   and their jettisoning of  aesthetic autonomy and the radical potential of the aesthetic.  This threat closes off the aesthetic  being in opposition to the logic of  the art market and its depoliticising effects. It represents the end of the avant grade and its aesthetic resistance to the rationalising forces of capitalism. Historically the going beyond for the avant garde  is a disruption of the smooth functioning of capitalism's calculus of profitability; a form of subversion if you like. 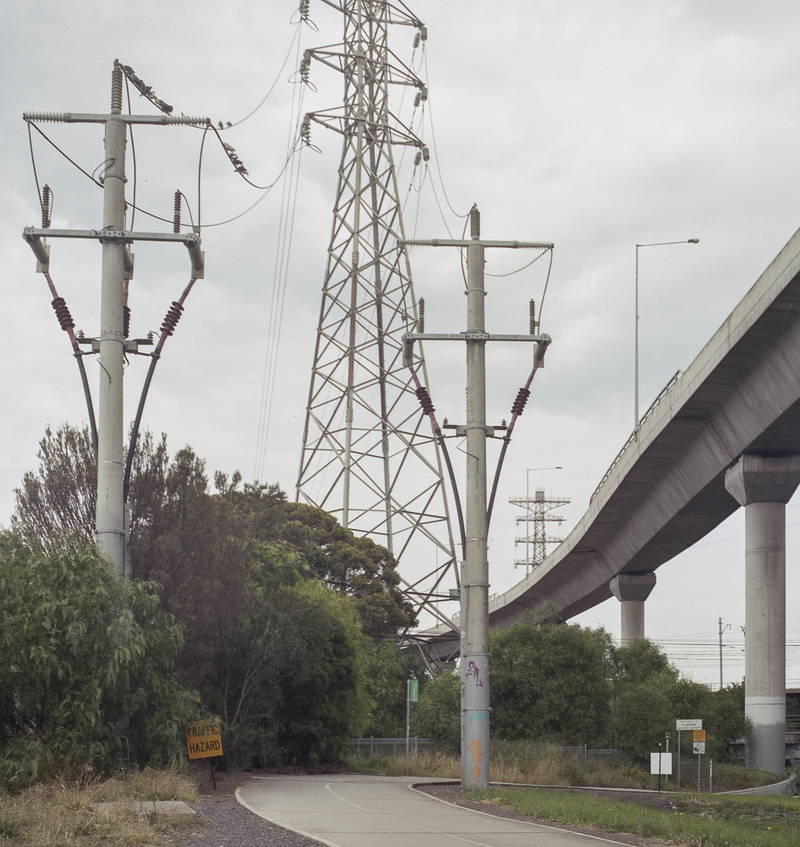 The question becomes: can a contemporary topographical photography such as this body of work  act as a mode of opposition to the market logic of the world of commodities, entertainment  and the art market  in post industrial capitalism? There is a question mark here,  given the non-existence  of an identifiable avant grade in contemporary Australia. Opposition/resistance/going beyond  in this context cannot be the logic of the new of both the modernist avant grade and the transavantgrade that was based on a willingness to experiment with means of expression, with styles and with ever new materials.

The reason is that the logic of the new and innovation is now a feature of the market-led  economics of art. Somehow a topographic photography must be able to act as an interruption of this art market discourse.  The new in this interruption would need to involve something which cannot be reduced to the terms of the known and knowable, the already-spoken and already-speakable.This is an  otherness that resists the closure of the market's systematised thought, involves an opening outwards,  and an interrogation of Melbourne's industrial urbanscape.